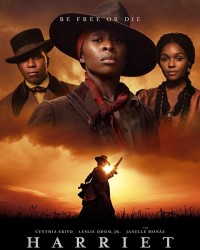 Cynthia Erivo, nominated this year for a Best Actress Oscar for her portrayal of Harriet Tubman in Harriet (2019), calls her character “a universal hero” who hasn’t been seen onscreen before. Like Glory, the movie presents a historical narrative about race, violence, and freedom that has implications for our present day. After our screening, join NPR’s Korva Coleman for a panel discussion on what has changed in the years between Glory and Harriet, and on the ways that Harriet Tubman’s time and our own are perhaps not so very different.

Tickets purchased now will be held under your name for pick up at the Cathedral on February 28.