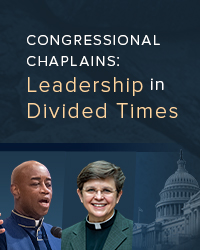 Registrants will be sent information by email to connect to the program. Registration is free for this ONLINE event. Donations gratefully accepted. If you wish to contribute, select the option in the drop-down.

In partnership with the National Institute on Civil Discourse (NICD), Washington National Cathedral hosts Senate Chaplain Barry Black and House Chaplain Margaret Kibben for a conversation about ethical leadership. As Chaplains, Black and Kibben have a unique relationship with elected officials. Dean Hollerith and Mr. Keith Allred, Director of NICD, explore public service, the Golden Rule, insights from military chaplaincy, and the role of faith amidst painful division.

On June 27, 2003, Rear Admiral Barry C. Black (Ret.) was elected the 62nd Chaplain of the Senate. He started his work on July 7, 2003. Prior to Capitol Hill, Chaplain Black served in the U.S. Navy for over twenty-seven years, ending his distinguished career as the Chief of Navy Chaplains.

Chaplain Black is a native of Baltimore, Maryland and an alumnus of Oakwood College, Andrews University, North Carolina Central University, Palmer Theological Seminary, Salve Regina University, and Alliant International University. In addition to earning Master of Arts degrees in Divinity, Counseling, and Management, he has received a Doctorate degree in Ministry and a Doctor of Philosophy degree in Psychology.

In her final active-duty assignment in the Navy, Rear Admiral Margaret Grun Kibben, was the U.S. Navy’s 26th Chief Chaplains, serving as the director of religious ministry for the Department of the Navy, advising the Secretary of the Navy, the Chief of Naval Operations, the Commandant of the Marine Corps, and the Commandant of the Coast Guard on all matters pertaining to religion in their respective services. Prior to this assignment, Rear Admiral Kibben served as the 18th Chaplain of the Marine Corps and Deputy Chief of Chaplains.

Born and raised in Warrington, Pennsylvania a suburb of Philadelphia, Margaret came on active duty in 1986. Her career spans both Navy and Marine Corps assignments from Newport, RI, Quantico, VA, Camp Lejeune, NC, Norfolk, VA, and San Diego, CA. Chaplain Kibben served both ashore, at sea, and abroad, with several deployments to the Mediterranean, as well as Norway, Turkey, and Afghanistan.

Dr. Kibben is a graduate of Goucher College in Towson, Maryland. She received both her Masters of Divinity and her Doctorate of Ministry from Princeton Theological Seminary, Princeton, New Jersey. She served as a Fellow at the United States Institute of Peace and holds a master’s degree in National Security and Strategic Studies from the Naval War College. Rear Admiral Kibben is married to Lieutenant Colonel Timothy J. Kibben, USMC (Retired). They reside in Alexandria, Virginia, with their pride and joy, their daughter Lindsay Elizabeth. Margaret enjoys cycling, swimming, gardening, cooking, and reading.