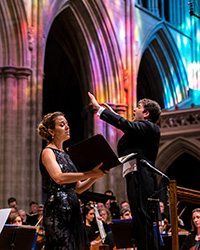 To experience Verdi’s Requiem is to take a journey that is felt as much as it is heard. To hear the work under the majestic arches of Washington National Cathedral is to encounter awe.

Giuseppe Verdi was a dramatic storyteller, and his Requiem will take you on a journey from the most serene musical moments to the thundering roar of the brass as the chorus sings, “Day of Wrath! O, Day of Mourning!”

On December 1, 1941, the brand-new Cathedral Choral Society held its first rehearsal for a performance of Verdi’s Requiem that would occur in May, 1942. Join us again as Steven Fox and an outstanding cast of guest soloists plumb the depths of this mind-blowing work.

Tickets start at $25. Student tickets are $20 each, and we offer a 10% discount for educators, healthcare workers, veterans, and active military.